The blockchain is a verification system, not a computation engine

The ledger of transactions is stored among a number of devices, or ‘nodes’ as they are more commonly referred to. Blockchain is the first successful form of distributed ledger for a number of reasons; the most important being that it solved numerous issues in Byzantine Fault Tolerance through a method called Proof-of-Work. Consensus can be thought of as nodes vouching that certain events happened through a mechanism that incurs them an extreme cost, making manipulating this witnessing very costly. In its simplest form, a blockchain works in the following way:

The blocks are produced in intervals, forming a chain of verifiable blocks that contain the transaction history providing data a form that cannot be altered without redoing the work of the previous blocks or confirmations. The end result is a single, immutable journal of transactions grouped through time - ordered blocks distributed and verified by all of the nodes on the network. A blockchain is a digital tracking ledger rather than a storage device, as it is often perceived to be.

The following is a brief list of the benefits which blockchain technology can provide:

Security: Blockchain technology ultimately relies on mathematics to gain `trust'. Being that data verified in the blockchain is immutable by nature, ownership can be accurately proven and tracked, ensuring these conventional forms of security breach are not possible since there is no `central' point to hack.

Traceability: The immutable nature of a blockchain enables a transparent view of historical events, reducing friction inherent in auditing processes. In particular, this can benefit supply chain management, in the form of improved quality control processes, fraud reduction, and tracking of items through the chain of custody.

Nexus is a collection of many different advanced technologies that have been developed for over 5 years. The public network was launched in September 23rd, 2014. We will briefly describe some of Nexus’ most notable features, and how these achieve greater scale and security than other existing blockchain platforms.

Scale
Nexus’ focus on scalability mainly resolves around the formation of important technologies that remove the bottlenecks inherent in Bitcoin, Ethereum, and other related architectures. It can be seen as follows:

Database: Nexus have developed a new database storage engine that rivals other large storage engines such as Google's LevelDB, and performs orders of magnitude faster than BerkleeDB (Oracle). As Nexus developed the Software Stack, the fundamental underlying bottleneck tended to be user disk indexing and throughput, which was the inspiration for the design of the Lower Level Database (LLD). This is one factor that improves the scaling capability. 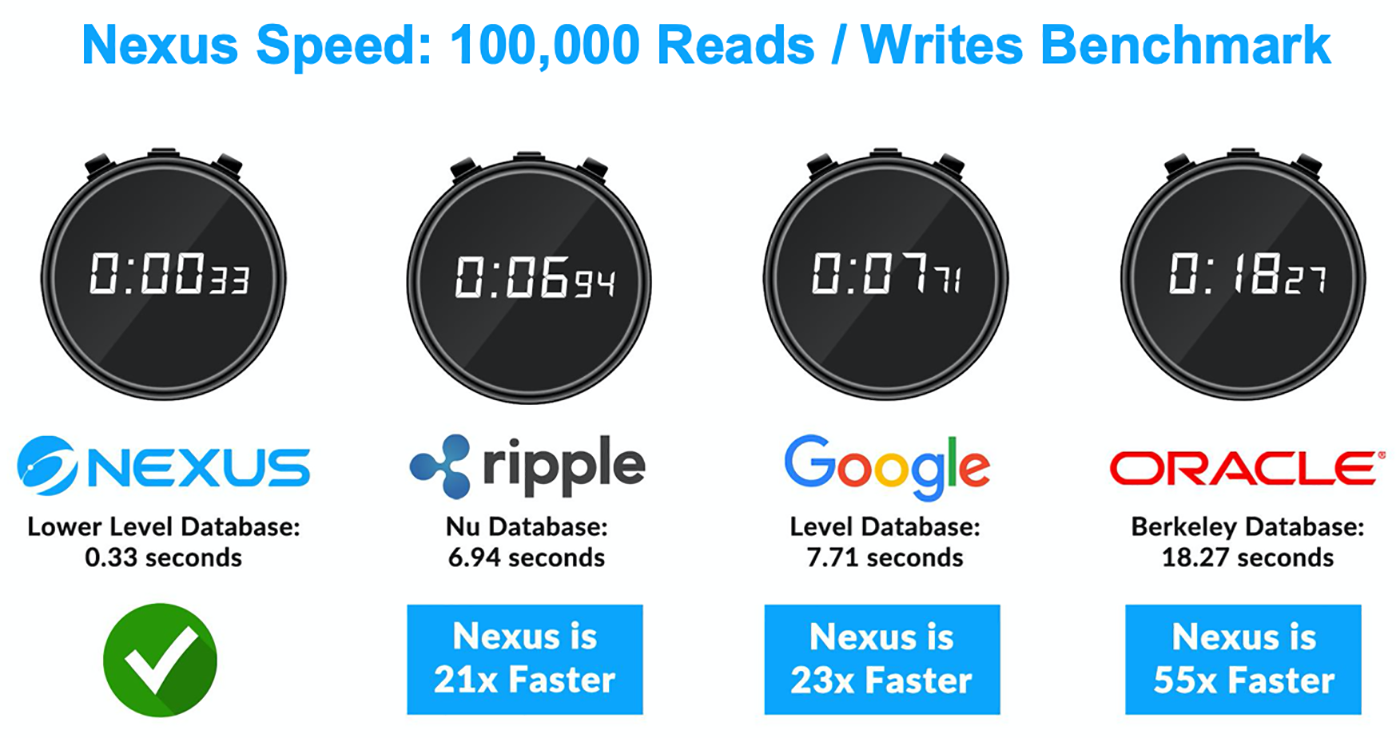 Layers: A layered architecture is not a new idea, but thus it exists because it has a proven track record of scaling inherent in implementations such as the Internet. To the best of our knowledge, Nexus is the only architecture that uses seven layers, to break contract processing into specialized tasks, that are capable of processing independent of one another. This is a fundamental quality of how the Nexus architecture scales compared to other implementations.

Protocol: Nexus have developed a simple and efficient protocol, which ensures that scale is achieved through simplicity. Formal tests with maximum processing on a single node were 450k requests per second, showing the pure throughput of packets and processing. This ensures that network and processing bottlenecks can be reduced to a minimum.

Security
Nexus’ security and design is the collection of decades of unique experience in both the public and private sectors. Nexus have made certain precautions and decisions that produce longer sustainability of the technology:

Post-Quantum Cryptography: Nexus developed an architecture called Signature Chains that enhance the security of existing DSA (Digital Signature Algorithms) against Quantum Computers, by hashing a public key until it is used, and changing keys every transaction. Complimented with this is the use of FALCON (Fast-Fourier Lattice-Based Compact-Signatures Over NTRU) as an option of extra security that uses Lattice Based cryptography to ensure the security of accounts in the post-quantum age.

Argon2: Nexus use Argon2, as password hashing function, for key and user-name generation, which is a memory-hard password hashing algorithm with variable complexity arguments, meaning that it can control how many seconds it takes to generate another key or username. This provides various benefits in the use of deterministic key generation, and makes the offline brute-forcing of 8 character alphanumeric passwords take on the order of 5 million years.

Ease of use and integration
Access to the Nexus Software Stack, is through a HTTP powered API. This means that all the required blockchain logic is abstracted away from the developer, making it easy to integrate into existing systems. The Nexus API also accepts www-url-formencoding which means that blockchain login portals can be run in parallel with existing login systems, without modification of the user interface.

At Nexus Enterprise, there are different types of blockchain available: Public, Private and Hybrid. Each type has its own features, and will therefore suit different applications across different industries.