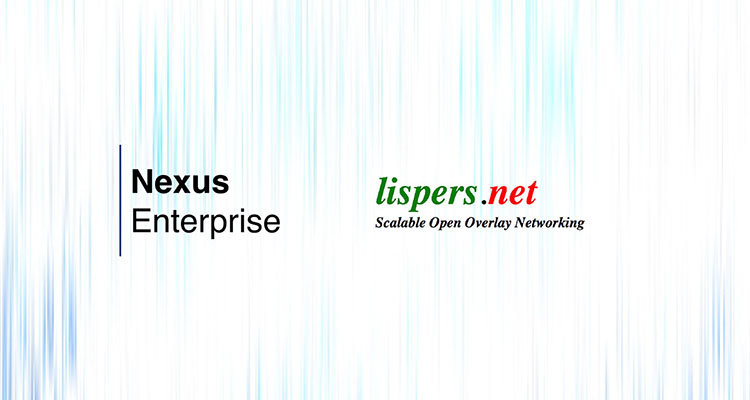 LISP (Location Identifier Separation Protocol) is a protocol designed by a small group of Cisco engineers - including Dino Farinacci - who are responsible for many of the protocols that power today’s Internet. It provides important advancements to the Network Layer.

The original Internet architecture was not built to handle the growing number of devices being used around the world or their ability to roam. Most Internet devices use IPv4 addressing (the Internet equivalent of phone numbers), which is limited to around 4 billion devices. To accommodate the growth of Internet-connected devices, IPv6 was developed, though even decades later it still has not been widely adopted. LISP is able to use IPv6 as an overlay, since it does not suffer from the compatibility issues of underlay devices. The integration of the LISP overlay with Nexus Enterprise applications will use 128-bit IPv6 EID addresses that can accommodate far more devices on the network.

Imagine if your phone number changed every time you changed location, this is how IP (Internet Protocol) addresses work in their current form. Alternatively, LISP provides a unique End Point Identifier (EID), that allows one to have a consistent address, even when roaming between networks. This means that genuine peer-to-peer connectivity is possible, because you are always accessible at one address, and remain so even when you are mobile.

Nexus Enterprise is currently the only blockchain services company working with lispers.net. The addition of LISP gives Nexus Enterprise designed applications a scaling advantage, by selecting the shortest paths between locations of Nexus Enterprise nodes, allowing them to be located anywhere on the Internet, along with residential environments, cloud providers and mobile carriers. Using LISP also allows connections to remain active while the node moves around or temporarily goes off the network so re-connection and application state synchronization can be avoided. This increases the speed and performance of a Nexus Enterprise node that no other blockchain has.

The implementation of LISP in enterprise applications provides a level of abstraction over the Internet, where users can manage their connectivity in addition to giving users a method to have closed and secure VPN. This level of abstraction also allows ubiquitous connectivity on any device, anywhere, while users move around. In addition, running a blockchain on an overlay makes a private blockchain more secure and easier to manage.

“I have had the honour of working with Dino for the past two years, so it's an absolute pleasure to be able to partner with lispers.net to dramatically improve our offering to our clients. Dino’s expertise and the technology offered by lispers.net is revolutionary and will support in our mission to increase blockchain adoption.”

“The fintech and business skills that Alex has mastered makes this partnership unique. We can bring great tech to enterprises that solve real and practical problems. Technology is worthless if it can’t solve people’s problems. The solutions need to be simple and understandable without introducing new and more complex issues. We believe the simple product offering and ease of doing business that Nexus Enterprise and lispers.net together will bring, is an obvious choice for enterprises.”

lispers.net is a non-profit engineering consulting company dedicated to the advancement of the Internet. We are building state-of-art next-generation Internet Architectures and Protocols to enable modern-use applications to scale securely and run efficiently.

LISP (Locator/ID Separation Protocol) was created by Silicon Valley’s, Dino Farinacci, to revolutionize scaling the Internet. Dino is a software engineer and the largest individual contributor to running code on the Internet. He was the first ever Cisco Fellow appointed in 1997 and currently holds over 40 Internet and networking related patents. For the last 30 years, Dino has been a member of the Internet Engineering Task Force (IETF), which develops standards for the Internet we use every day. When Dino left Cisco in 2012, he wanted to pursue and focus on next generation use-cases for this new LISP technology. LISP is currently being tested by tech giants such as Comcast, Bloomberg, NBC and Cisco. Learn more: www.lispers.net.